What NOT to do when you’re playing men’s league hockey.

You scored a goal? Great. Act like you’ve been there before. You look like a clown over celebrating a men’s league goal. Who are you trying to impress anyway? The two middle aged wives in the bleachers with their kids here to watch daddy play some puck? Congratulations, you went bar down on some fat ass goalie that just finished polishing off a 30-rack and a meat-lovers pizza before the game. Someone call the scouts, I think you might be the next Gretzky. Said nobody. A simple fist pump and a pat on the back will do.

Men’s league hockey without beer is a lot like having sex with a condom on…it’s just not as good. If you say you got the beers then you better have got the beers. If you don’t have the beers, go get the beers. Simple.

Hey guys I forgot the beers…

If you are a men’s league goalie then you are in a binding contract that requires you to be at every game. I don’t care if your house burnt down, your dog got ran over, or the wheels of your car fell off. Find a way to get to the game or I will hate you forever. Nothing kills a buzz faster than getting suited up for a game just to find out that your goalie didn’t show up and you have to forfeit to a couple scrubs.

If you’re going to argue a call keep it short and don’t cause a fucking scene. If your argument is longer than “that was a bullshit call”, kill yourself. I’m serious. There is no hope for you anymore after that point. High school is over bro, college is history, let it go. It’s men’s league. Are you really going to yell at a guy reffing men’s league hockey? The dude’s life sucks already. Leave him alone. Get the fuck in the box, shut your face, and get back out there and play like a man.

Bringing Drama into the Locker Room

I’m here to slug beers and play hockey. Simple as that. I don’t care how much you hate your job, girlfriend, wife, parents, or whatever. Sorry but I just don’t give a fuck. If you have a problem with someone else on the team take it outside cause no one’s got time for that shit. Keep the topics to hockey, booze, chicks, and other related bro talk. 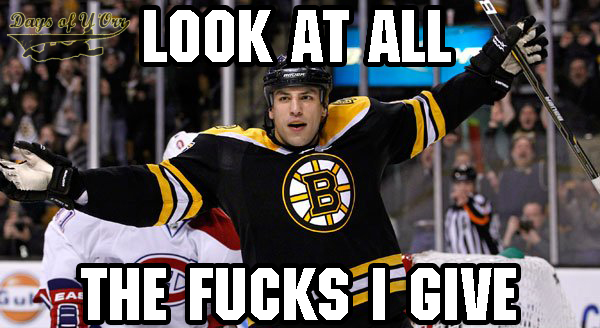 Not as bad as forgetting the beers, but dying on the ice from dehydration isn’t exactly on the top of my list of things to do. Your team will get over it eventually, but for the next 60 minutes you have to watch everyone slowly pass out knowing that you’re the jackass that forgot the water bottles. Not cool bro.

You might be mad, and the guy you’re mad at might be an absolute douche. But never stoop low enough to throw a cheap shot his way. Fighting is one thing because it takes two to fight, but taking a guy out in men’s league is embarrassing and stupid. At the end of the day we’re all going to work in the morning. I don’t want to show up for work hurting because some crazy asshole decided to take a stick to my face or a knee to my kidney for trash talking him in some beer league hockey. How do I explain that to my boss?

Like that? Here’s 7 TYPES OF PLAYERS YOU WILL FIND IN EVERY MEN’S LEAGUE

and… Men’s League Player Poops in Other Player’s Glove. Promptly Get Banned For Life

What do you think? Cancel reply